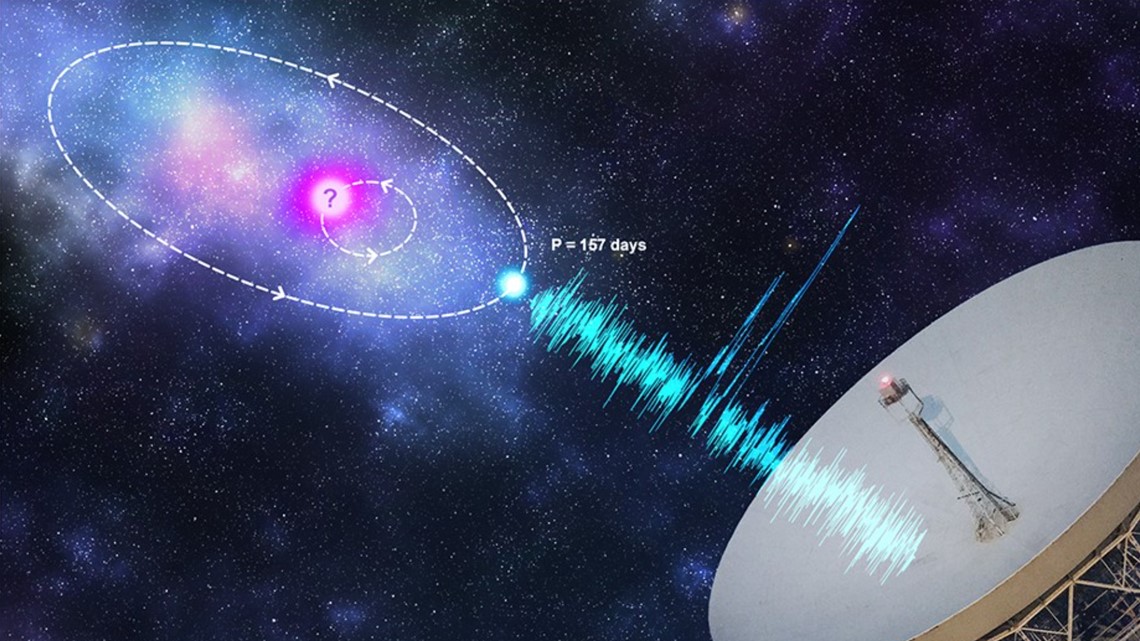 The unexplained signals are thought to be coming from a distant galaxy, and their repeating pattern makes them significant for researchers.

WASHINGTON — Radio signals from outer space are not entirely new. Scientists believe that one-off cataclysmic events are where many radio frequencies from space originate.

What makes this latest repeating fast radio burst, or FRB, so significant is that it has a repeating pattern. This is only the second time ever in history that scientists have been able to detect a radio signal from another galaxy which repeats in a pattern on a regular basis.

Scientists at the University of Manchester in England made the discovery and say that the FRB follows a cyclic pattern, which has radio bursts that last about 90 days in a window. Those are then followed by a period of silence of 67 days. It’s a discovery which provides an all important clue that helps scientists trying to figure out where these radio frequency bursts are coming from.

According to researchers, the frequency has the same start-stop pattern, which repeats every 157 days.

The head of the study, Dr. Kaustubh Rajwade of the University of Manchester, said, “This is an exciting result as it is only the second system where we believe we see this modulation in burst activity. Detecting a periodicity provides an important constraint on the origin of the bursts and the activity cycles could argue against a precessing neutron star.”

For a while now, researchers have been studying the FRB, known as 121102, closely with the high powered, huge 76-meter Lovell Telescope, which has been used by scientists since the 1950s. Not only have the researchers been able to discover the interesting pattern of repeating FRBs, but the scientists’ work has also highlighted the need for long-term monitoring of these frequencies.

Fast radio bursts were only first discovered back in 2007. Then in 2016, it was finally discovered that some of the frequencies can repeat. This latest discovery by researchers in the United Kingdom proves that the signals can have patterns as well.

The iPhone's steady cash flow makes Apple more like a safe bond than a...

The VERIFY team looked at several claims regarding President Trump, mail-in ballots and the USPS. This week the United States Postal Service has dominated headlines...

Democratic Rep. Jim Clyburn questioned whether the White House's plan to boost Covid-19 vaccine developments could be "benefiting one or two people."

Trump is going to dominate Davos – even though he won't...